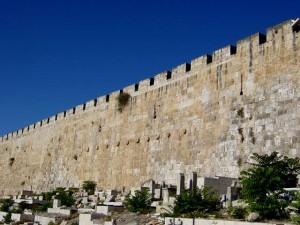 Nehemiah wasn’t exaggerating when he prayed to God saying, “Hear us oh God, for we are despised” (Nehemiah 4:4). Called by God to rebuild the walls of Jerusalem and rally the exiles who were already “in great distress” the task itself was difficult. Upon hearing his calling, Nehemiah sat down and wept for many days (1:4).  He humbly accepted his duty and got to work. It wasn’t long before the enemy was also hard at work:

When Sanballat heard that we were rebuilding the wall, he became angry and was greatly incensed. He ridiculed the Jews,and in the presence of his associates and the army of Samaria, he said, “What are those feeble Jews doing? Will they restore their wall? Will they offer sacrifices? Will they finish in a day? Can they bring the stones back to life from those heaps of rubble–burned as they are?” Tobiah the Ammonite, who was at his side, said, “What they are building–if even a fox climbed up on it, he would break down their wall of stones!” Nehemiah 4:1-3

Doing God’s will and His work means coming up against strong opposition from and enemy that would like nothing better than to see us give up and quit. I like smooth sailing as much as the next person, but it just doesn’t work that way in the spiritual realm. God’s people are mocked, teased, threatened and worse for trying to set about the work they have been given. What I love about this story is Nehemiah’s response:

So I stationed armed guards at the most vulnerable places of the wall and assigned people by families with their swords, lances, and bows. After looking things over I stood up and spoke to the nobles, officials, and everyone else: “Don’t be afraid of them. Put your minds on the Master, great and awesome, and then fight for your brothers, your sons, your daughters, your wives, and your homes. And it happened, when our enemies heard that it was known to us, and that God had brought their plot to nothing, that all of us returned to the wall, everyone to his work.” (Nehemiah 4:13-15)

This is how it’s done folks! If only we applied this more often to our own setbacks. Here are some things Nehemiah did that I find amazing:

We all have walls that need rebuilding, gates that need fortifying, vulnerable places that need to be patched up so the enemy can’t have access to them over and over. This story encourages me to go after the things God has told me to do without the fear of failure or ridicule nagging at me in the back of my mind.  It is nice when things just seem to fall into place, many things worth having, however, are going to come at a price. How amazing to walk through that fire of discouragement, conflict and disappointment and come out on the other side just where God intended us to be.

“Those who built on the walls, and those who carried burdens, loaded themselves so that with one hand they worked at construction, and with the other held a weapon”… (4:17).

There it is in a nutshell: Hold your weapon in one hand and keep working with the other! Don’t go about it alone, be someone’s watchman. Be a prayer warrior for someone who is hurting. Take your eyes off of the opposition and those who ridicule you – put them squarely on God and restore all those walls that have been torn down, they will be stronger than they ever were before.

One thought on “Hand Me Another Brick!”