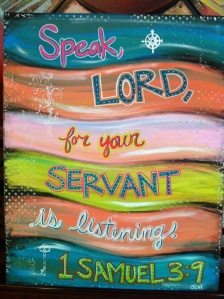 “Now the boy Samuel ministers to the Lord before Eli. And the word of the Lord was rare in those days; there was no widespread revelation. 1 Samuel 3:1

Samuel was just a child when called by God. He “grew up before the Lord” and “ministered to the Lord”. I’ve always kind of glossed over these phrases in the story and focused more on the events of Samuel’s later life. It’s what happens in those beginning stages however, that shape us for the rest of our lives.

MINISTER TO THE LORD

The first thing we see is that Samuel “ministered to the Lord.” His first calling, first duty, was to minister to God Himself. He spent time alone with God, hearing and learning from Him alone. There were priests that served the people and priests set aside to minister to the Lord. Ministering to only people will allow you to hear what the people think. Ministering to the Lord first and foremost allows you to hear what He has to say. Being a minister to God doesn’t mean you don’t minister to people – it simply means that hearing from God must come first. Now days, it’s easier to latch on to the world’s opinions and solutions. God’s way is deemed too narrow and too exclusive. It’s true, following the Word of God and His direction may not be the most popular, but it is the BEST way.

As for them, whether they hear or whether they refuse – for they are a rebellious house –  yet they will know that a prophet has been among them.” Ezekiel 2:5

Not everyone will hear. In fact, most people will reject God’s truth. It was true in Samuel’s day and it’s still true. In the midst of a rebellious people, Samuel STILL ministered to the Lord and was blessed. NO REVELATION

What a sad scripture this is to read. In spite of everything functioning on the surface (all the logistics were in place, ministers, priests, etc.) there was “no widespread revelation”. God’s people had walked so far out of His will and His ways that the revelation had all but dried up. They followed the scriptures, but not the GIVER of those scriptures. People were not receiving the life-giving words they needed. There is a huge difference between God’s word and human wisdom:

“They speak a vision of their own heart, not from the mouth of the Lord… For who has stood in the counsel of the Lord, and has perceived and heard His word? …But if they had stood in My counsel, and had caused My people to hear My words, then they would have turned them from their evil way and from the evil of their doings.” Jeremiah 23: 16,18,

So many people can speak their “vision” and it can sound so good. But how many of them have actually stood in the counsel of the Lord and surrendered that vision to Him? There are a lot of really popular “Christian” authors out there who are using anything but the Word of God to influence people. Humor. Catchy sayings. The world’s belief system. They have book deals and shiny, fancy blog sites with thousands of followers.The purpose, it seems to me, is to make people agree with them. The more “likes” the better. I read them. I read them because sometimes the grain of truth comes out and they make me smile. But they are not my food. They almost never contain anything from God’s Word. People don’t really desire the Word anymore. They desire some new take on it… a watered-down version that makes everyone feel good. God is Love, yes indeed, but He is also Truth. Revelation comes by the Word of God. Take the Word out of the picture, and the revelation dries up. A NEW COVENANT! We are so blessed to live in a New Covenant where we have free and equal access to God’s truth! He doesn’t hold it back. But we do need to honor Him. In a world that goes out of it’s way to dishonor His covenant, we can be like Samuel who chose to hold it up. Minister to God first, put Him ahead of people. If no one listens, it’s ok. We may live in a time when true revelation is rare, but for the believer who abides, it should be the norm! God gives graciously and freely to those who seek Him with a whole heart!