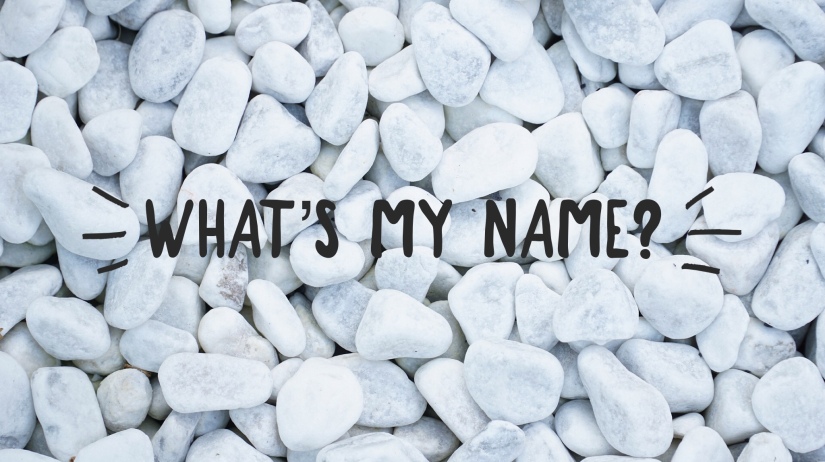 “It ain’t what they call you, it’s what you answer to.” WC Fields

Conservative. Liberal. Classical liberal. Evangelical. I was reading a comment thread where people were arguing the virtues and vices of all these labels we take on or give out. On and on it went, everyone arguing in circles about “what does it all mean”… telling people to agree while simultaneously disagreeing with everyone. Lord have mercy… there is an obsession happening over identity.

Identity is a big deal. We need everyone to not only see and hear our specific brand, but to put a big stamp of approval on it as well. We need it so badly, we are willing to go to outrageous and embarrassing lengths to prove our points.

One of the enemy’s greatest desires is to confuse us in this area by slapping all kinds of labels on us in the hopes that we will carry them around like dead weight. Lies that people speak over us, circumstances we refuse to leave in the past, all the junk we collect through the years becomes our filter by which we define ourselves. We all I bet can vividly remember being called something awful as a kid and internalizing it for years.

The one who was abandoned. The one who is sick. The ugly one. The divorced one. The failure. The dummy. If the enemy can’t label you, he’ll do everything in his power to see that nothing sticks; you have no true identity, it changes with your feelings and you float around like driftwood waiting for something or someone to define you.

We all go through it, we try and act like everyone else to be accepted. When I was a teen it was giant hair and rolled jeans. Things have escalated since then… I dare say the enemy has stepped up his game. Teens now can adopt one of seventy three different genders if they want. I’ll say it, it’s positively demonic. When you lose your identity, you are at the mercy of evil.

God tells us “Before I formed you in the womb I knew you, before you were born, I set you apart.” (Jeremiah 1:5) Our identity comes from our Creator, there can be no other way. His word also tells us this: “For as he thinks in his heart, so is he.” (Proverbs 23:7) Our true identity is set, but what we believe about ourselves is what steers the ship. God sees the big picture about us, but it’s up to us whether we walk in that or not.

The Bible addresses this a lot. Abram, Saul, and Simon became Abraham, Paul and Peter not because they morphed into different people, but because they finally walked into who they always were meant to be. We have an authentic identity, all of us, and lots of phony ones competing for position. Study the story sometime of Daniel and his friends in Babylon and the ways in which the Babylonians tried to strip them of their very identity. We learn in Sunday school of “Shadrach, Meshach and Abednego” but we actually need to know them as “Hananiah, Mishael and Azariah” as well. Their Hebrew names conveyed trust in God and confidence. Their new Babylonian names identified them as cowardly slaves to man.

I spent the first three months of my life with a different name. After I was adopted, my parents gave me my true name. To my birth mother I was Ronna Kay, to my mom I became Shara. I never think about it, but how strange! All the while, here is Jesus knowing me better than anyone and exactly who I would become. This verse in Revelation 2:17 has always stood out to me:

“To the one who is victorious, I will give some of the hidden manna. I will also give that person a white stone with a new name written on it, known only to the one who receives it.”

A new name, a true version of who we are. Can you even imagine this?! It’s not a tossing out of who we are here on earth, but a celebration of who God created us to be and our being welcomed into that beautiful truth. We don’t have to wait until heaven though to embrace it. We do need to throw off all the false things trying to weigh us down, and that isn’t easy in a culture obsessed with validation. We are slaves to the approval of others and it is becoming our undoing.

What would a Kardashian sister do if social media suddenly went away? If you work out at the gym and don’t post about it, did it really happen? It’s funny and tragic at the same time. We are tied up in the wrong stuff, carrying around too much baggage and worrying about insignificant things. One of the most difficult things to show kids these days is that their value is not determined by their peers. Easier said than done.

Our culture loves its labels. To the point where it’s bordering on absurd. We are aching to be identified, but ready to pounce if someone “mis-identifies” us. The irony of it all is that we all want to be a part of something. We need an identity to cling to. It isn’t found in man, it can’t be found in achievements, it’s only found as we see ourselves as a beloved creation of a loving Creator. Any other way leads to chaos, which we witness on a daily basis. For example, schools and businesses going “gender-neutral” all while adopting dozens of genders. You are nothing and you are everything all at once. Pick a label, any label.

Looking to anything else but Jesus to define us is an exercise in futility.

Until we all get our white stone, we have the joy in looking to our Creator to give us identity and purpose. Not the kid on U-tube, not our jobs, not even those closest to us. When you know God and who you are through Him, you don’t have to conjure up false labels, you just get to step into yourself.

Wife, mom, Colorado girl, Parisienne at heart. Living and writing about what happens when we surrender our lives to the great I Am. View all posts by SharaC